My inner ramblings of motherhood and more. 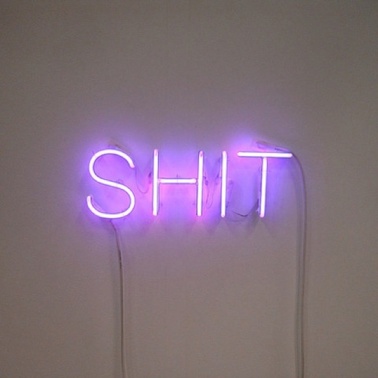 Now here’s an Idea – how about you jack in your four day a week job and lunge beyond the threshold, into the realm of freelance life. Claw back a slither of control, attempt to “work around the girls” a little more – Oh, and invest some time doing a bit more of what you love – writing your blog.

Do excuse me, I was just pissing myself laughing for a moment there.

Herein lies the Irony of it all. It’s taken me approximately 7 weeks to finally sit down and pull together this blog post – a pleasurable pastime, of which I presumed (wrongly) with my new-fangled vocation, I would be doing a lot more of. I anticipated there would now be more time in which to pen my posts – focus on channelling my ever-present anxiety by bashing out some therapeutic, and with any luck – engaging prose.

Well kids, it would seem I was a little (snigger) in the dark as to how this would work. So, let’s start with how I IMAGINED freelance life to be shall we? A chronological gander into how my days might have played out.

It would begin with a milder morning – for a start, I wouldn’t have to get myself up, showered, dressed, both girls sat down to breakfast and out of the house by 7.30, so our mornings should now offer a less panicked start to the day. (snigger)

Therein would follow a jaunty 25-minute walk to pre-school alongside the girls, sporting my new sweaty betty active wear.

I would wave off Elsie into pre-school – her perfectly preened bunches swinging as she skips merrily through the gates, turning back to blow me a kiss on her way.

With a little more time on my hands, I am able to engage in casual tête-à-têtes alongside the pre-school mums, with whom I usually only got to give a brief royal wave to of a Friday morning, ‘on my day off’. (snigger)

For two days of the week, I am lucky enough to have Marnie in nursery from 9am until 4pm, meaning that with Elsie in pre-school 8.30-3.30 I get a whole SIX hours to focus on work, with no interruptions. (snigger)

On the three out of five days Marnie is with me, I relish the time we have together – we hit the park, scooter in tow ready to wear her out for a long nap at lunch, so I can crack on with work. Maybe we would grab a snack and coffee at the café? Share a pain o chocolat? Who knows!

After a successful pick up, light banter about Elsie’s day and some quality time together, the girls sit down for their freshly prepared and homemade spag bol (which I whipped up earlier that day no less) – they devour the lot. (snigger)

Without having to endure another restless and shitty commute to race home in time for the girls bath, we are able to take a slower pace on the day – enjoy the simple pleasures of just ‘hanging out’. (snigger)

Jamie arrives home to share the bath and bed time load, and with both girls fast asleep, I reheat the spag bol (prepared earlier that day, remember?) and we sit down to enjoy dinner, some mind-numbing TV and a glass of wine before calling it a night.

Now, my friends, I’m gonna slap you – square on in the chops, with the REALITY:

Manic. Agitated. Restless. Anxious. Twitchy (oooh that’s a goodun) and finally, FRANTIC. The magnificent glossary of words provided me with infinite descriptions of how, in reality, my newly found mornings would play out.

Firstly, there is shouting. So much shouting. This isn’t to say there wasn’t shouting before – there was. However, the shouting levels have somewhat increased in the last few months – mainly they come from me but also, the girls. We all just shout.

Elsie shouts (or usually sobs) that her milk is too warm. I try to select my battles, I really do, so I pop in a dash of cold water, offering up what I hope (and pray) is just the right amount of temperature reduction. She sobs her milk is too cold. I shout. Marnie shouts because she doesn’t want her breakfast and displays her protest by performing the dreaded “swipe”. I shout. Getting them to actually eat breakfast is a mammoth crusade in itself, and one that involves endless, repetitive (and mostly empty) threats as I guiltily hurry them to “EAT FASTER, WE ARE GOING TO BE LATE. AGAIN”.

By the time we have left the house I would approximate that I have spent near on 20 minutes on my hands and knees picking up cheerios, crushed blueberries and plastic IKEA spoons from the floor. #blessed.

In between further roaring, I speed shower, get dressed and trowel a questionable amount of makeup onto my face. I then go forth and cajole the girls into their clothes, which quite frankly, and understandably they remonstrate against because they would rather reside on the sofa watching Annie for the 80th time that week. Now listen up, I have DAYS’ worth of love island and Real Housewives of Cheshire on the planner girls – DAYS! I get it, I fucking get it. Alas, pre-school beckons.

I hoof Elsie’s hair into a promised ‘Elsa plait Mummy’ – an experience which she screams throughout as if I am plucking individual hairs from her scalp with tweezers, rather than brushing it with a ‘tangleteaser’. We then spend ten precious minutes rearranging Elsie’s socks so the seams sit perfectly across her toes – she cannot and WILL not put a shoe on until each sock is impeccable. More shouting.

As we tackle one another to leave the house – I perform the ‘knee in the stomach’ tactic to enforce a back arching, hysterically screaming Marnie into the buggy – because she wants to scoot, like Elsie. Once again, I get it. I want to hop in the car and drive, maybe catch a taxi – or even a bloody bus. Nevertheless, we must walk – our fully functioning legs and lungs can and will do this – let’s just crack on shall we. And crack on we do, with an apple incentive and promises of ‘after pre-school treats’ – I know. I am weak, but I don’t care.

We’re out the house. Elsie scoots for approximately five minutes, before she drops to the floor – her legs apparently so weak, that even I begin to wonder if maybe she has contracted polio during the night. I reintroduce the snack incentive which goes down like a shit sandwich, and so – I begrudgingly but steadfastly graduate towards the threats, and then I shout. Again. FFS.

I would approximate that one, out of five journeys to pre-school there will be tears. A Russian roulette of Hayward girls weeping. Which one of us is going to weep next – your guess is as good as mine, but it’s usually me.

We arrive at the preschool gates clammy and angry whilst I inconspicuously hoof up the crotch of my newly purchased Primark activewear leggings (Elsie likes to call them my ‘go faster trousers’ – seemingly they never fucking work) We are late. We are nearly always late, or at least – we are never early.

I attempt to make half arsed conversations with the other mums but never quite managing to fully engage in a good old chin wag.

On the three out of five days that Marnie and I get to hang out, it goes a little like this. After a swift nod to the park, whilst Marnie performs various scooter tricks (chicken leg, anyone?) and I’ve inhaled my highly anticipated first coffee of the day, we hit Sainsbury’s. Marnie noshes near on an entire pack of babybels walking the aisles (pick your battles ladies and gentlemen, pick your battles), and we trudge home as I try to spank away the looming guilt that we’ve not indulged in a class of Monkey music, meanwhile Marnie is totally impervious as she is high on cheese.

On non-nursery days, nap time befits the holy grail of a ‘work window’. The dread of ‘will she or wont she nap’ lingers from 9am until she is finally asleep around 1pm, and I am too fucking scared to breathe or eat lunch, let alone turn on my laptop – for fear of waking her.

2.50 Marnie wakes. She’s barely opened her eyes as I hoof her back into the buggy (altogether now – SNACK) and we speed walk back down to preschool.

A wondrous greeting from Elsie awaits as she barks “Where’s my snack” and we engage in deep conversation about her day. “How was your day baby?” “Good” Right. “What did you do today?” “Can’t remember” Oh. “What did you eat for lunch?” “Nothing” I see. “Who did you play with?” “No-one” FFS.

An array of culinary delights are available in our household these days – on the tea time menu, you can find – beans on toast, fish fingers, sausages, pesto pasta, scrambled egg and a side portion, always a side portion of cucumber.

More often than not, Jamie arrives home in time for some pre-bed excitement to the soundtrack of me screaming “FOR GODSAKE JAMIE, STOP WINDING THEM UP – IT IS DOWNTIME NOW” and we crack on with bath, sharing the duties in getting the girls to bed as soon as possible.

On the evenings the both of us are in, we consume one of our standard mid-week dinners on our laps, before we both bang out the laptops and start working again. Occasionally we break away from our screens to argue about who does more around the house (me) and why I have stuffed too much rubbish in the bin again. I know. We are outrageous.

So there you have it. A tale of vision (hallucination?) verses reality. I’ve said it once and I’ll say it again – I like to dream big.

But, alas my friends – you simply can’t do, or more importantly have it all (I’m leisurely learning on my merry way) and alongside my fresh calling as a ‘Freelance content creator’ (I don’t make this shit up) comes a renewed, but hugely less controlled routine – something that doesn’t rest easily with me. I crave structure, organisation and order – all of which I practised daily in my old role.

WOAH WOAH WOAH, HOLD ON A FUCKING SECOND LOVE. You wanted this right? The change, the freedom, the ‘flexibility’ and the control? Hell yeah, yeah I did. And, it is still very much what I desire, and what I am trying to accomplish but, much like this ruddy parenting malarkey – I am learning on the job, firing all the questions, harbouring all the doubt, but doing my very best. It’s basically the ultimate, enduring apprenticeship at LIFE.

So, despite my ramblings, of the downy, e-number coated days I imagined to be mastering, and taking the brave leap into what had the potential to be the worst decision of my career to date, this has been anything but.

It has been the right decision, and the greatest choice for us as a family, but I am also very much a novice. We are in the throes of working out what does actually work for us, but I feel incredibly lucky that as I navigate the hurdles of freelance life, alongside the relentlessness of motherhood – I now have so many more choices available to me.

Whether that’s dropping (despite the shouting) Elsie at preschool and hanging out (even if it is at Sainos) with Marnie, organizing an en masse PIZZUP for likeminded muthas in my evenings, penning a post during nap time, and working as productively as possible around childcare – I am focused on finding my feet, and even if I’m usually shit at admitting it – I feel like I’m doing ok.

7 thoughts on “Bringing Flexi Back”